Calm Before The Storm

And thankfully, we're not talking about the weather.

The first of "it" arrived Saturday morning for our group run!

"It'll get pretty busy the next few weeks (though)," says Volte founder Bill Dwyer.  "We have several in Run Thru The Woods on Thursday and a few running out-of-state Thanksgiving Day races.

First, though, came the sweltering. Kacey and Katie ran their own races but put down identical times of 2:08:29 while Gabby, the triple fall marathoner, paced a friend to a 2:20:54 finish.

Some ladies that we hope to see in the Volte ranks soon also were in the Alamo City.

Of course, Philadelphia is known as the City of Brotherly Love.

However, somebody forgot to tell Will Ott's stomach that.

Our Volte friend and Woodlands Fit coach went to the Pennsylvania city without a Super Bowl win in search of a 3:25 marathon, but instead switched to the Gore-Tex Philadelphia Half Marathon and put down a 1:46:01 time that was better delivered than a Phily Cheesesteak sandwich.

And then, there was shivering at the HMSA Classical 25K last Sunday, November 24 in downtown Houston. 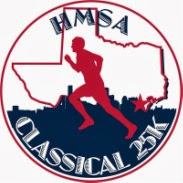 But it should haven't bothered Paul Vita, the Penn State graduate, too much.

"I felt pretty good," he said.  "The temperature was fine, but the wind was tough on the backside so that cost me some time."

Yet, Paul still conquered the triple-loop course from the Wortham Center to Shepherd and Memorial to post a finishing time of 2:26:40.

And like Allison, one of our long-time friends at Volte, Strive Performance Coaching founder and current Finish Strong Coaching coach Kim Mc Namee was the third overall female in 1:41:56.

Mc Namee, 42, said she used the race as another step in her preparation to run the Chevron Houston Marathon in January for the first time in 10 years, where she qualified for the 2004 U.S. Olympic Team Trials - Marathon.

Posted by Volte Endurance at 10:36 AM