A few weeks back, Bill Dwyer and I were discussing schedules:

It's tough to facilitate a weekly Saturday long run and to make everyone's races.

I love supporting our Volte runners as much as Bill does.

We agreed that I would take the Saturday long run so Bill would be able to make The Seabrook Lucky Trails race.

I would make the San Felipe Shootout the following Saturday. 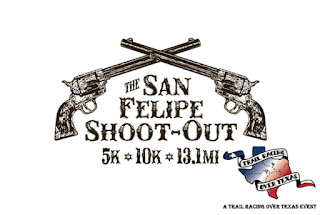 He would then make the Texas 10 Series race in College Station on Sunday.

As the days progressed, I started thinking about the Shootout.

I have cheered people on (at a trail race), but never actually run one myself.

The idea of actually running it was starting to cross my mind.  I needed nine to 10 miles for my own long run that weekend.

By doing the 5K and the 10K, I could accomplish that goal and still support the other Volte runners, all the while getting a few race day photos.

I talked to Bill about it at our weekly Tuesday track workout and came away with a plan to do the first two races and then to walk as much as I could of the third.

My longest run up to this point in my training had been six miles of run-walk.  The two races would get me to nine.

I spoke with Bonnie Scholz that week and hatched a plan to follow her up on race day, since this was her second race at this park. The race site was in Sealy at Stephen F. Austin State Park.

I got a pre-race pep talk from Bill by phone and a surprise "Hello! and Good Luck!" from Jen Smith.

All of the predicted weather seemed to be moving into the area we were leaving.

On arriving, the parking was very close to the start line and packet pick-up.

Everything went very smoothly.   The race producer, Trail Racing Over Texas, also had a couple tables of goodies available for purchase.

Bonnie, her sister Michelle Fregia, Juan Flores and his buddies were running all three races. Marta Mixa would be running the half.

Bonnie set up a "Camp" for the day behind the start line, which consisted of a couple of chairs.  Her race plan involved sitting down after all the races.

I knew I would not have that opportunity, but was proactive of having somewhere to leave my things and knowing where to find everyone after the races.

We all left drop bags, which had everything that we thought we would need for after each race or to access after each loop, in the chairs.

An aid station was set-up right next to the Start/Finish Line.

We would be passing it - which seemed to be well manned and stocked - as we finished each loop.  Porta potties were just across from the aid station.  It was a really great set-up.

Start time found us all corralled up and us seeing Juan and company for the first time.  Everyone was ready to go as the horn blew the start.

I carried a handheld Nathan hydration bottle and my camera.  My plan was to walk for a few minutes to warm up, so watching everyone tear away from the start line was a little surreal.

I started my run-walk intervals after a couple of minutes.

I was able to get some pictures of everyone as they came back thru the out and back portion of the loop.

It was very interesting how quiet the trail got when I was alone.  Yes, alone.  I was definately at the back of the pack.  It's not where I want to be, but it is where I'm at and I have embraced the situation for the time being.

The 5K was going very well:  until the very end.

I tripped and fell on a bridge within a minute of finishing.  Wish I could say it was a root or unlevel ground, but no just my very long feet.  It felt like I went down in slow motion. I had stumbled and tried to regain my footing, but was unable to do so.  I hit the wooden bridge with my right knee.

My reaction was to laugh and get back up with the help of the runner that was behind me.

Not anywhere near my previous fastest 5K.  Almost embarrassing actually, except that I know how far that I have come from my first miles back in October.  (The first mile that I walked post surgery was over 30 minutes, so then I put it into perspective.)

It all makes me smile and appreciate that I am able to train and I am getting better, fitter, and eventually, I will get faster.

I finished my 5K with enough time in between to actually find the group and see how everyone did.  I found the aid station for a quick drink on the way, refilled my water and got myself a cup of Tailwind.

Everyone was excited and greatful that weather had cleared; however, it was really humid. The trail itself was well marked and clear of all debis.  The Park staff had done a super job of getting the trails ready for this race.

I used run-walk intervals the entire way as I wanted to have six solid miles of run-walk to set me up well for my half marathon training.

My first loop felt really good.  It felt mentally so much better to run out with everyone as opposed to walking and watching everyone run away from you.

The trail itself was a mixture of dirt paths and areas where the path had been reconstructed/repaired with a mixture of crushed rock & granite.  (I may be wrong about the granite.)

I took advantage of the aid station between loops.  I have to say they were really very well stocked.  One of the volunteers was making frozen Tailwind slushies in a blender and I took in a small cup of that along with some pickle slices.

The second loop of the 10K found me walking in the areas where the crushed rock mixture was and running on the softer dirt surface.  This slowed me down considerably but my legs and feet thanked me for it.

By the end of the 10K, my feet were starting to hurt a little, but everything else felt great.

However, by the time I finished, the half had been underway for almost a half hour (having heard the horn go off earlier from a distance.)

I took my time to regroup and get off my feet for a few minutes after finishing:  more Slushie, more pickles, a couple of cookies and I felt like going back out.

My entire goal was to see how many miles I could get in walking.

It's always interesting what your mind thinks you can do and what you can actually do.

This goes back to paying for three entries because it was cheaper. I really should have just stopped there, but no, I had something to prove now.  I wanted to belong.  I wanted to be part of all of it.

I knew two miles in, though, that this was a mistake as it just hurt to walk.

I managed to finish with my dignity still attached and with no regrets about stopping and I will be back to do this again.

I found out where I was physically, and I'm good with it for now.

I will keep working at it with a smile on my face.

My "A" race is still a few weeks out and I am looking forward to it.

I needed a goal race to help keep me focused on recovering as I am now six months post surgery.

I am slow but getting stronger as I am going thru all the things that new runners go thru when they first start moving their bodies again.

It all hurts, but it's all good (to quote Nine Volte).

This is truly a joy to do this and I loved every step that I took.

+  Everyone should try this.
+  The scenery beats any road race hands down.
+  The participants aren't bumping and running over you with "Now" manners.  Instead, the whole thing is very relaxed.
+  The aid stations are awesome:  frozen Tailwind slushies, cookies and pickles.  Really loved the pickles.
+  Sitting around post-race rehashing the day with fellow teammates was really special.  It's hard to do this at big races.

I see another trail run in the future.
Posted by Volte Endurance at 12:04 PM