Volte Loved February and February Loved Its Runners Back

As a large number of our runners spent the month of February either recovering from their efforts at the Chevron Houston Marathon and the Aramco Houston Half or completing training for The Woodlands Marathon, Volte still had plenty competing in a menagerie of races throughout the Lone Star State.

Except for Bonnie Scholz, who took off to Page, Arizona on Saturday, February 24 to complete her second career 50-miler at the Antelope Canyon Ultramarathon.

Next in the distance club for the month was David Campbell, who placed second in his age group at the Rocky Raccoon 50K Trail Run on Saturday, February 10 in Huntsville State Park.

Capitaizing on her Chevron Houston Marathon fitness at the start of the month was Waverly Walk.

She and her father, Jon, traveled to Waxahachie to compete in the Southwestern Assemblies of God University (SAGU) Half Marathon on Saturday, February 3.

Dad held an advantage for the first seven miles before Waverly put the hammer down and completed the long course in 2:14:12 - six minutes ahead of Jon who finished in 2:20:17.

The course map was printed as 13.25 miles and as runners approached the mile 13 mark, the finish was more than just a tenth of a mile away.

Later that evening, a handful of Voltes picked up 2017 Texas 10 Series age group awards at the Armadillo Cup and Ten Gallon Cup Awards Party in Cypress.

Jerritt Park and Keri Amador was first in the respective age groups while Alfredo Gonzalez was third in his.

He ran the out-and-back course in 20:39.  Mayra Caamano and Monica Moreno finished in 25:23 and 31:18, respectively.
Seven Hills Running Club friend and resident of The Woodlands Curtis Barton posted a time of 28:52.

Maryanne Svoboda recorded a first place age group finish the following Saturday, February 10 at the Klein Bearkat Bash 5K with a showing of 26:50.

The next day, George Rux and Griselda Borrero got the Volte multisport season kicked off for 2018 with their participation in the Du The Polar Bear Duathlon in Cypress on Sunday, February 11.

Their split times were as follows:

The second annual Montgomery County Meals on Wheels Miles for Meals 5K was held at B-52 Brewing Company in Conroe on Saturday, February 17 - and Volte and friends represented.

Mary-Ellen Wilderman-Hay paced our Volte friends with a 23:49 effort, while husband Brad followed in 27:28.  Maygen Ritchie stopped the clock in 29:25.

A large group of Voltes supported Rob and Debra Myers who sponsored the Out of the Darkness Walk in The Woodlands on Saturday, February 17 through their company Enfusia. 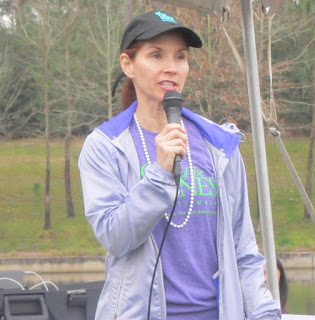 They ran the Rodeo Clown Roundup 5K with Lauren taking second in her age group in 29:17 while Jared finished in 40:07.

At the Austin Half Marathon the same morning, Juan Flores got in a good test for April's Boston Marathon with a 1:45:28 showing on the hilly course.

The big event on Saturday, February 24 was the Pathfinder Pediatric 2K in The Woodlands.

Held a week earlier of The Woodlands Marathon for the first time, Volte had a host of boys and girls participating.

Some had participated in The Woodlands Running Club Juniors program and picked up an extra medal for running 25 miles on their way to race day.

Completing the 2K were - in addition to Volte friends Kate, Jack and Anna Looney;  Faith Craig and her children Abby and Roger Craig; Kristi Park and her daughter Riley; Amanda Becker and children Caitlyn and Tyler; Keri Amador and her son Lucas; Monse Louimeus and her daughter Jackie Medina; Gabby Westbrook and her daughter Olivia; Carrie Hyde and her sons Alexander and Braeden, and Brian Jackson and his daughter Emma.

Geri Henry won her age group in the Cleft Smiles 5K the same morning in The Woodlands with a time of 35:58.

Monica Moreno completed her busy February with a 1:05:03 finish at the ConocoPhillips Rodeo Run 10K in Houston on Saturday, the 24th.

Penny Garza also represented Volte in the 5K in 50:41.

Sabina led the trio with a time of 50:40, while Scott, likely in his distinctive orange hat, was just three seconds off of Sabina while John finished - certainly with a smile - in 53:12.
Posted by Volte Endurance at 5:01 PM