So for him to admit that he’s just a little bit superstitious might come as a shock to some as he gets ready to head to North Bend, Washington as 28 of his group’s runners will run Sunday’s Tunnel Light Marathon.

“We also have seven very good friends of our group running with us,” he said.

Just don’t ask him for a forecast of what he thinks his group is capable of on Sunday.

Yes, he’s plugged all of his athletes’ numbers in the various marathon race time predictors, but his counter to the numbers is the impressive work they’ve put in the last five to six months.

Including some who have never before committed to training through the summer for an early fall marathon.

“Our group is in great shape and I’m very blessed to have such a great group to travel with,” Dwyer said excitedly.  “The weather will be good.  There has been light rain this week so the course will be a little extra fast.”

And the 42 degrees weather – even with showers in the current forecast - at the start of Sunday’s race in Hyak located on Snoqualmie Pass will be a welcome respite from the many miles trained by Volte athletes in shoes filled with humidity-induced perspiration.

“The historically good temperatures, great organizers and volunteers set up athletes for a good day,” he said.

This will be Dwyer’s second group to take to Washington state.

Volte’s engagement with Tunnel Light began two years ago after Jen Smith – who will be running the Berlin Marathon on Sunday - moved from Katy to The Woodlands and shared with the group that a friend of hers had run the race in 2015 and posted a 14-minute personal best.

“It was immediately on our runners’ radar,” he said.

Laura Godfrey and Sandra Tezino both ran the race in 2016, each posting times of 3:39, qualifying for the Boston Marathon and recording a personal best.  (It was Tezino’s debut marathon.)

“With their success and trying to qualify some of our runners who had run The Woodlands short course, we had 20 make the trip last year,” he added.

Even though the course drops more than 2,000 feet over its length, Dwyer is loathe to call it a “downhill course.”

“Tunnel Light isn’t the same type of course (as the Revel races),” he said.  “(The drop) makes it a very gentle 1.5% downhill grade on a re-purposed railroad track.”

“It is more like a trail run, but a smooth and fast trail.” 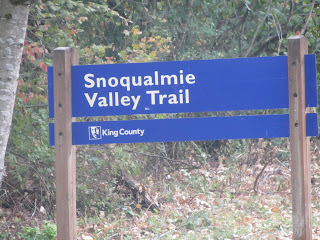 He stated that – on average – Tunnel Light was four minutes faster than a flatter course like Houston, but data from MarathonGuide.com confirms that it is actually 20 minutes faster.

This year’s “Light at the End of the Tunnel Marathon” race, held on the same course, but in early June, drove the average finishing time down – for that race – to 4:00:41 (with 504 finishers).

And it isn’t just the fastest of the fast that benefit, he said, but one thing’s important as with any marathon.

“Training is the key.  Everybody can benefit,” Dwyer noted.

Dwyer’s runners, who have prepared for Tunnel Light under three different Volte coaches including a few self-coached runners that joined in on group runs and workouts, really didn’t change its traditional marathon training approach. 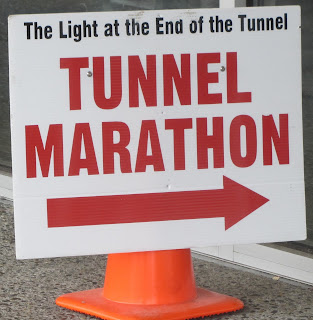 “For the steeper Revel races, we’ll run League Line or Flintridge, use the downhill setting on a treadmill with additional core work,” he said.  “It is very hard in our area to train for an event that starts at 7,600 feet and ends at 2,500 feet (as with Revel Mt. Charleston).”

For those who have previously qualified for or are on the cusp of qualifying for the Boston Marathon for the first time, the race is held literally between the two weeks of registration for the 2019 race in Beantown.

“Those who qualify on Sunday will have three days to enter for 2019,” Dwyer noted.  “And historically it's the first weekend for qualifying for the next Boston (2020).

“We won't know that for sure until Boston announces that after the 2019 registration is completed.”

Volte’s roster (with their coaches) for Sunday looks like this:

Nine of this year’s group of 28 ran Tunnel Light a year ago – and five of those qualified for Boston.

And for some of the 19 that are new to Sunday’s race, their reasons are as varied as Texas weather.

Volte’s marathon leader with 37, Drew George, his were two-fold:  “to participate as a member of the Volte team and as a training run in prep for my Grand Canyon rim-to-rim crossing in two weeks.”

Mayra Caamano seeks to run a marathon in all 50 states.  Sunday’s race will be her fifth, with her Marine Corps Marathon counting as Virginia.

And for Letty Gonzalez, it’s a bit more than the run itself.

“I chose Tunnel Light this year as a challenge to myself.  The past year was a tough one on me as my Dad lost his battle with cancer in late January,” she said.  “Being part of a team, Volte, has helped me cope with my loss.

“Everyone is supportive.  The pain of my loss does not go away but knowing that I have friends that care about me and what I’m doing makes each day a little brighter, and it also helps to have a coach that believes in me.”

In addition to coach Mary Carter, Dwyer said Volte’s team on Sunday will be benefit from a six-person support crew, which will include Alfredo Gonzalez, Juan Flores (who qualified for Boston at Tunnel Light last year), Jimmy Baker, Debra Myers, Llana Bingham and Jim Rosser.

“Most of our support won't be on the course as it's pretty tough to get around and you run the risk of missing people,” he said.  “We'll have support at the start, and at the finish and one person on the course.

“Support is mostly helping with the team dinner Saturday, keeping everyone calm, and getting to the shuttles on time Sunday morning.”

In addition to keeping mostly everyone calm, one of Dwyer’s masterful skills, though, is tapping well into the psyche and confidence of each of his group’s runners, making even the most recreational runner feel like an elite.

His basic advice for those 19 who haven’t run it before is course awareness.

“The Tunnel Light course has limited access so other than the aid station volunteers and a few adventurous friends and family there are not many spectators,” he said.  “It is also a hike and bike trail and is not closed off to the public so know that going in, stay on pace, and enjoy the scenery.”

And don’t stop – even though they might be tempted to do so before -- to give their coach a hug until after they finish – and have collected their medal. 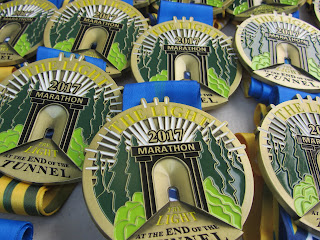 Tammy Grado thought about it a year ago.

However, the difference between her time underneath her age group’s qualifying standard and the registration cutoff for Boston was – one second.

One second is something Meredith Moss knows a little bit about -- and has been thinking about for six months.

Sunday’s marathon will be her second.

The Woodlands Marathon earlier this March where she finished in 3:40:01 – one second over her age group’s qualifying standard.

BQ, PR or a great race with even better friends, Volte’s primed well for its biggest out-of-town race experience in the group’s seven-year history.

Also on Sunday, three Voltes will be running the Berlin Marathon.

Joining Jen Smith, who is currently living in England with her husband and three kids, will be joined by statesider Lauren Hoffart and Criss Neumann, who lives in Germany with her husband.
Posted by Volte Endurance at 10:36 AM